To:    Buffalo County Board of Adjustments

Re:    Testimony OPPOSING the Segerstrom application to change their existing CUP.
___________

Please deny this application and require that it be considered a major change to the CUP.  This CUP was one of the very first frac sand mining CUPs granted in the County, and serves as a great example of a bad one.

Over the last several years, the County has established a much better framework to document, evaluate and approve sand mines – largely in reaction to lessons learned from these very early CUPs, which did not do an adequate job of protecting the interests of Buffalo County.

While it is unrealistic to think that this mine can be shut down at this stage in its development, it is important to reign in this reckless operator and subject the mine to the requirements that we have imposed on later applicants.  Treating this application as a “minor change” without acknowledging the substantial issues associated with it is a disservice to the citizens of Buffalo County.

Reasons why this is a “Major Change” to the Segerstrom CUP:

1.    This application asks for a material change to the size of the mining operation.  The original reclamation plan states that the total area to be mined is projected to be 450 acres.  This plan reduces that by more than half, to 159 acres while at the same time requesting a wet plant.  The goal of this application appears to be to change the primary business of this operation from being a mine to being a processing plant.
2.    Current CUP does not limit the number of outbound loads shipped, does not specify destinations and does not specify haul routes.  How can the Board of Adjustments evaluate the health and safety impacts of this mine due to outbound truck traffic with the information it has in front of it?  This has been seen repeatedly as a crucial public policy issue in other applications, yet this application (and CUP) is mute on that topic.
3.    Current CUP does not limit the number of inbound loads shipped, does not specify sources of those shipments and again does not specify haul routes.  Since it appears that this application is paving the way for Segerstrom to become a regional wet-processing plant for regional mines –long after the (now reduced) mine has been wrapped up.  This represents a huge loophole, which could cause endless trouble for Buffalo County citizens for decades and which ought to be rigorously documented and reviewed before the revised CUP is granted.
4.    The current CUP specifies a 5-foot separation from groundwater, yet the proposal shifts the mine boundary to within 100 feet of the Buffalo River.  How can a mine be moved that close to a river and still operate within that groundwater-separation standard?  Where is the documentation upon which to make that determination?
5.    The original Reclamation Plan describes several locations on the mine site that are “too steep to reclaim” and implies that those areas will not be mined – yet the Segerstrom operation has already destroyed one of those steep hillsides and now proposes to expand mining in these “too steep to reclaim” steep-soils areas.  Here is yet another reason why this application ought to be subjected to the rigor of the current application and review process.  Where is the analysis of the impact on the scenic beauty of the region, not to mention the environmental impact and habitat loss that will result?
6.    There are substantial property-line discrepancies between the original Reclamation Plan description of the mine, and the current proposal.  See the attached diagrams for several examples of where A) there are sizeable differences between the boundaries of the property and B) mining is proposed in what are likely to be disputed lands.  There is no indication that a qualified surveyor reviewed the diagrams or maps associated with any of the Segerstrom CUP applications.  Shouldn’t the County require that before granting this application?
7.    The current CUP does not specify a setback for mine boundaries.   While the original reclamation plan describes what appears to be either a 50 or 100-foot setback, the CUP is mute.  The proposed mine diagram encroaches on that original setback in key locations.  In some cases, the encroachments put the mine boundary very close to the Buffalo River (and Highway 37).  In other cases, the reduced setbacks increase the risk of encroaching on neighboring lands.

This is primarily an appeal for due diligence and proper process.  Please deny this application and let that happen. 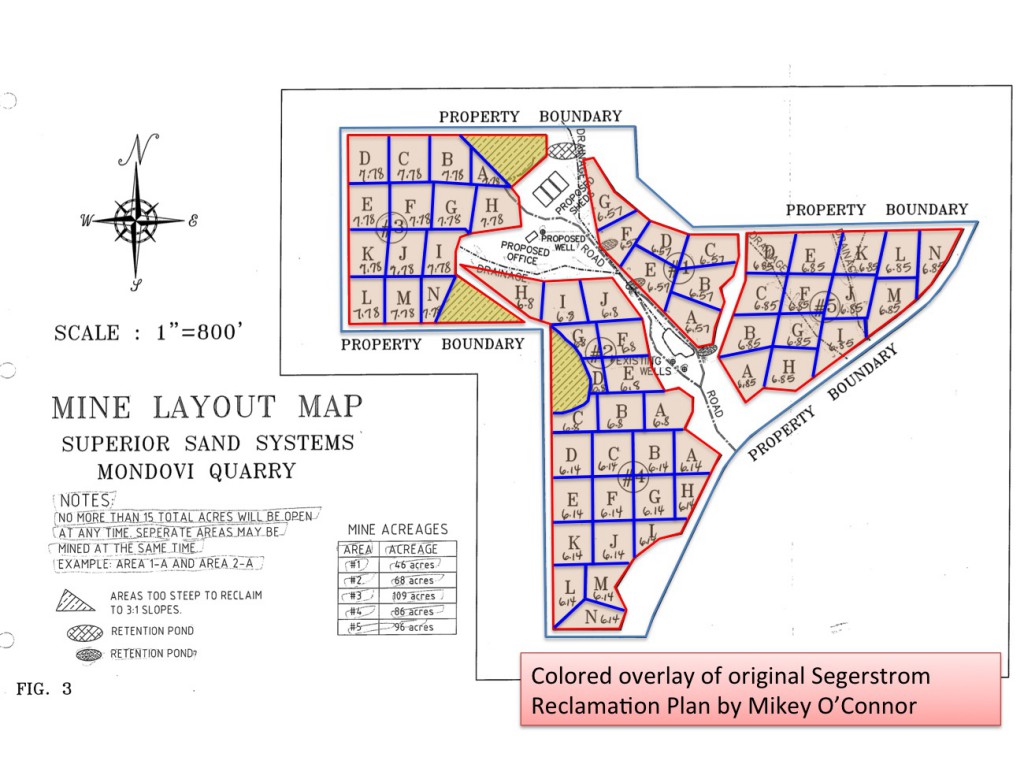 This is the mine layout contained in the Reclaimation Plan.  I’ve overlaid colored boundaries in order to create layers that compare the original Rec. Plan with the new proposal. 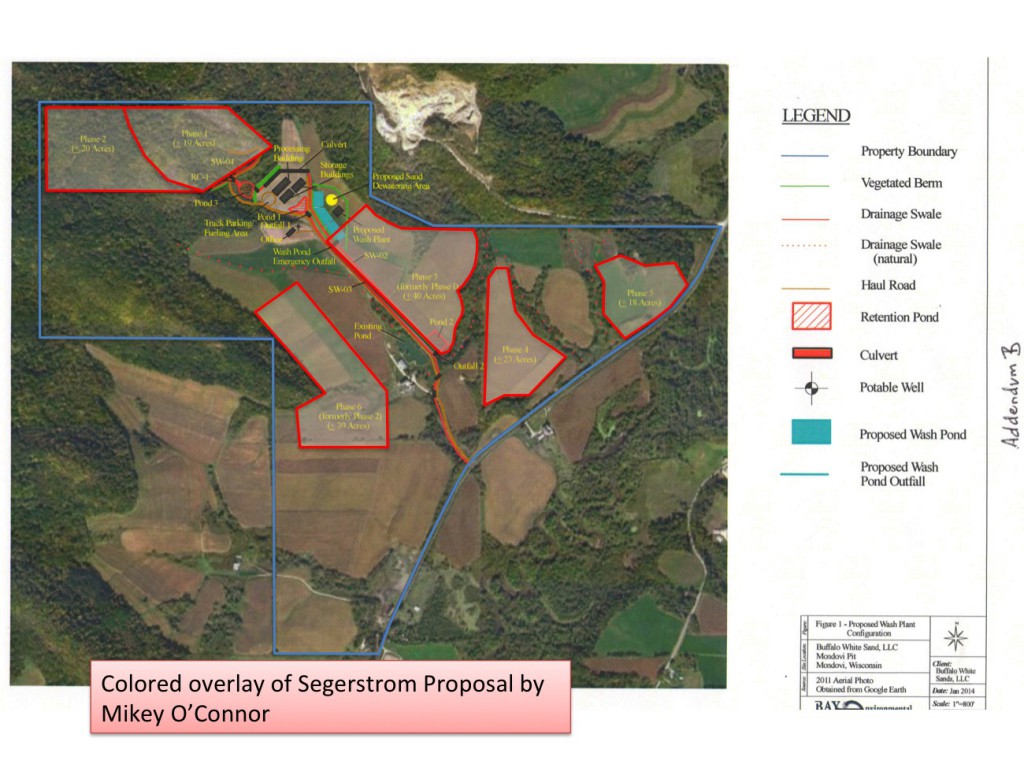 This is an overlay based on the proposal that is before the BOA.  Again, just colored boundaries overlaid on top of a map provided by Segerstrom. 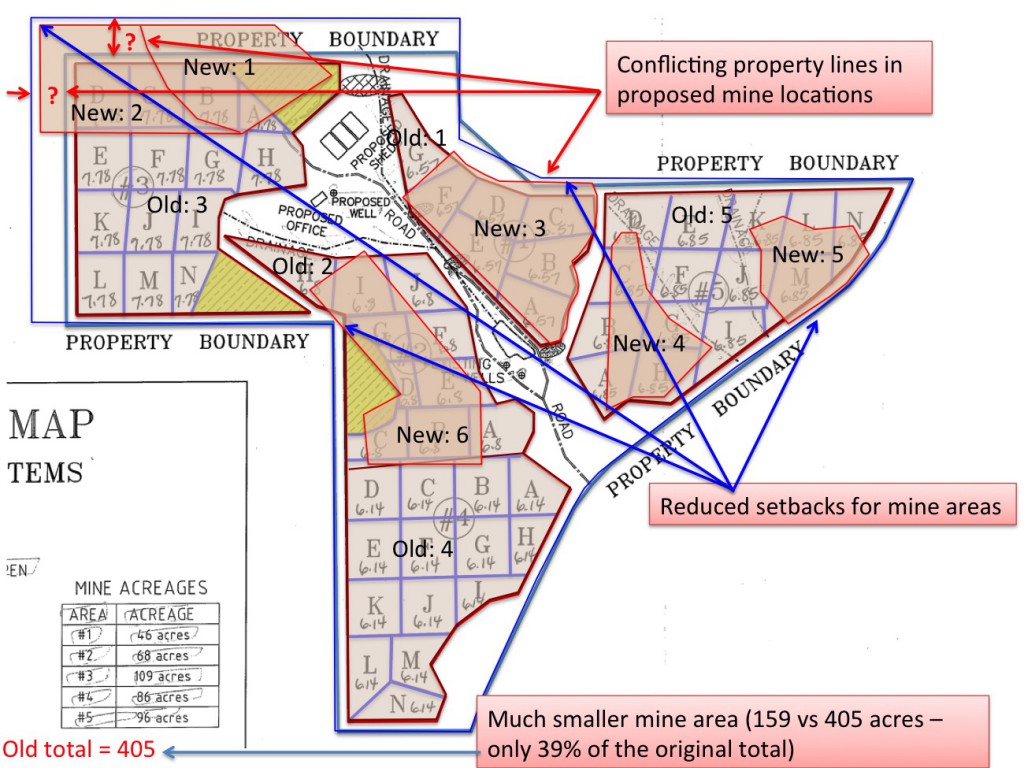 This map puts the two maps I drew on top of each other.  It emphasizes the boundary issues that are raised by discrepancies between the original Rec. Plan and the new proposal.

Note that the property boundaries in the two proposals align well along Highway 37 and the southwestern boundaries.  These are easy to determine from satellite imagery.  However, discrepancies appear in the wooded areas to the north and west. 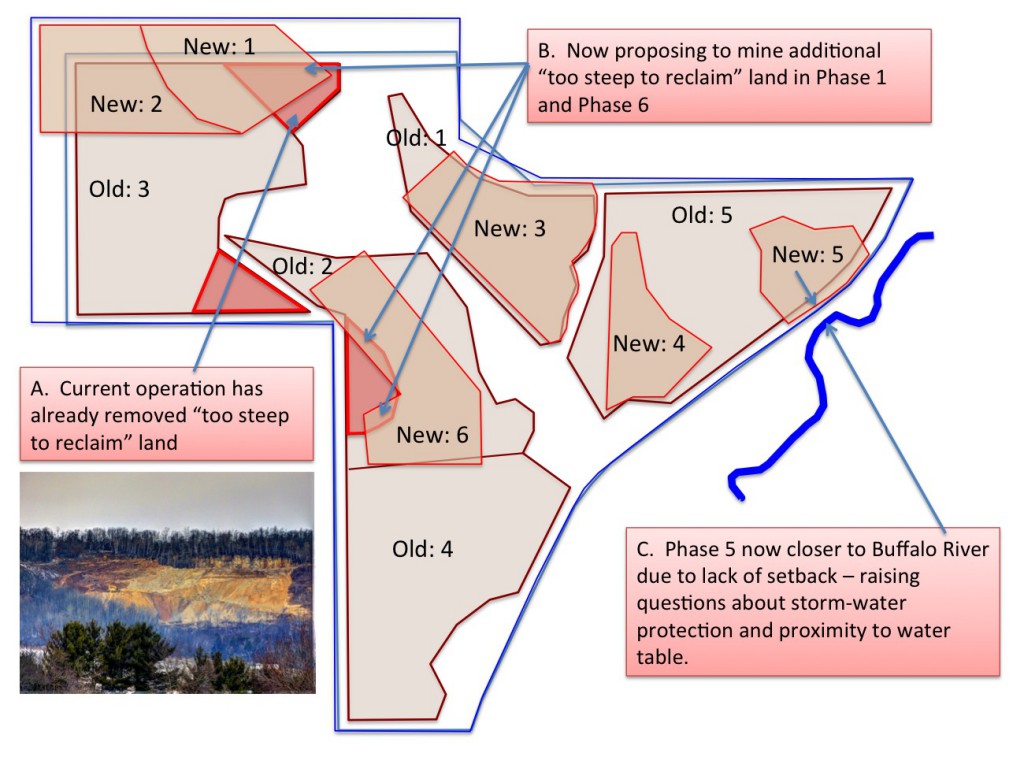 This map also overlays the two maps.  This version emphasizes the environmental issues that are raised by differences between the original Rec. Plan and the new proposal. 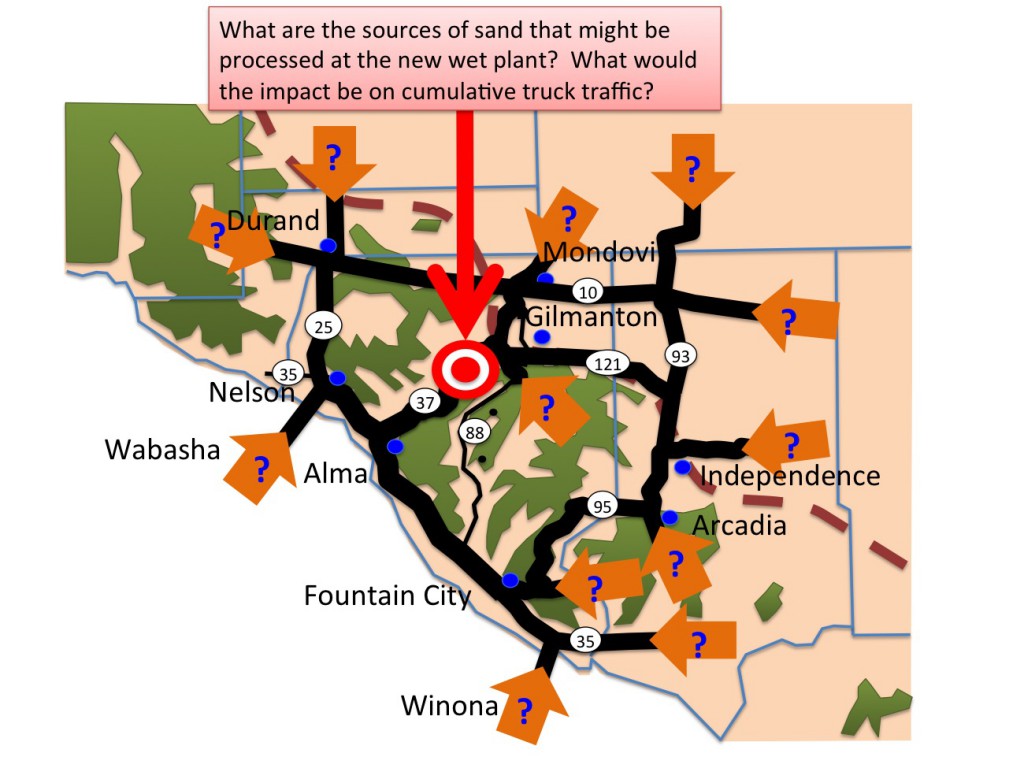 This map highlights the fact that there are no CUP conditions on this mine with regard to processing sand from sources other than the mine itself.

Given that the mine is getting much smaller, one has to wonder whether the real reason for this “minor change” is to develop a regional processing plant to service and enable other mines. 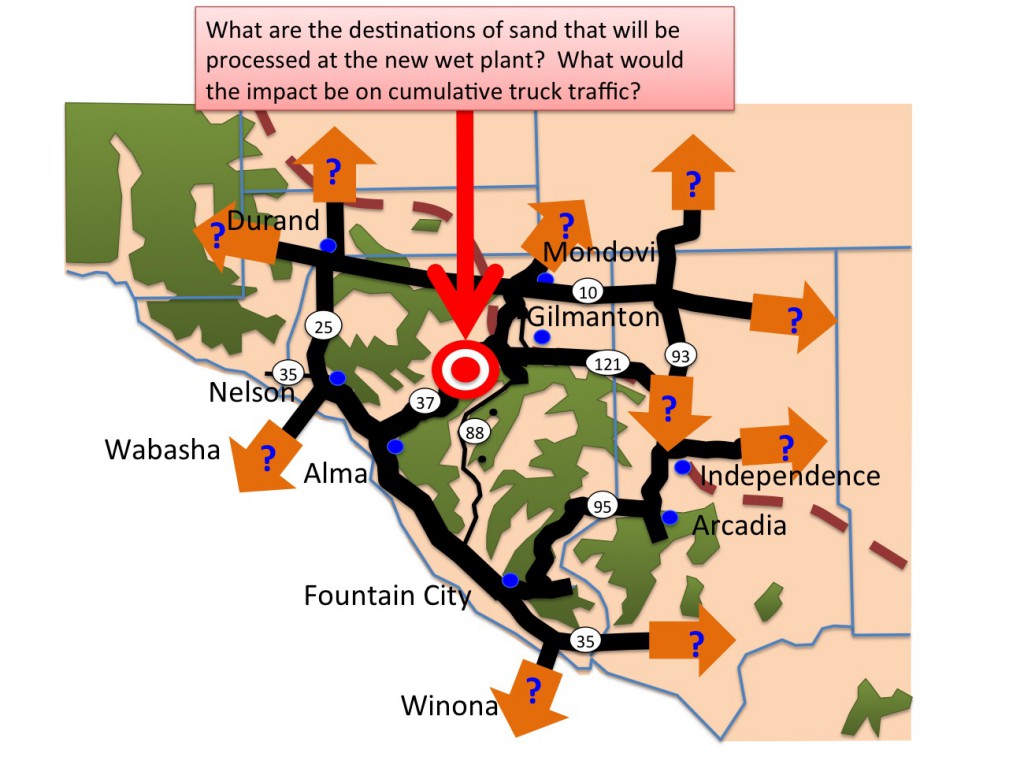 This map describes the problem with the lack of CUP conditions describing outbound haul routes and destinations.

There are no conditions on how many loads/day of processed sand, or the destination of those loads.  There are indications in meeting-notes that 100 loads/day is the target, but there are no CUP conditions to enforce this limit.