This is the series of slides that I submitted as my testimony today.  My goal was to pose questions that the Corps could consider and respond to.  Click on the slides for bigger versions.

Since the deadline has been extended, feel free to steal any of these ideas and use them in your own testimony.

Slide 1 — you’ll see in later slides that I’ve revised my calculation for truck trips after a phone conversation I had with folks at the Corps.  I realized afterward that there’s still a puzzler because during the phone call they said that all the dredge sand is either going to the Carrel’s site or the Alma Marina site, depending on which half of the pool the sand comes from.  So I’m wondering how much sand actually goes through the Southside Fitzgerald location. 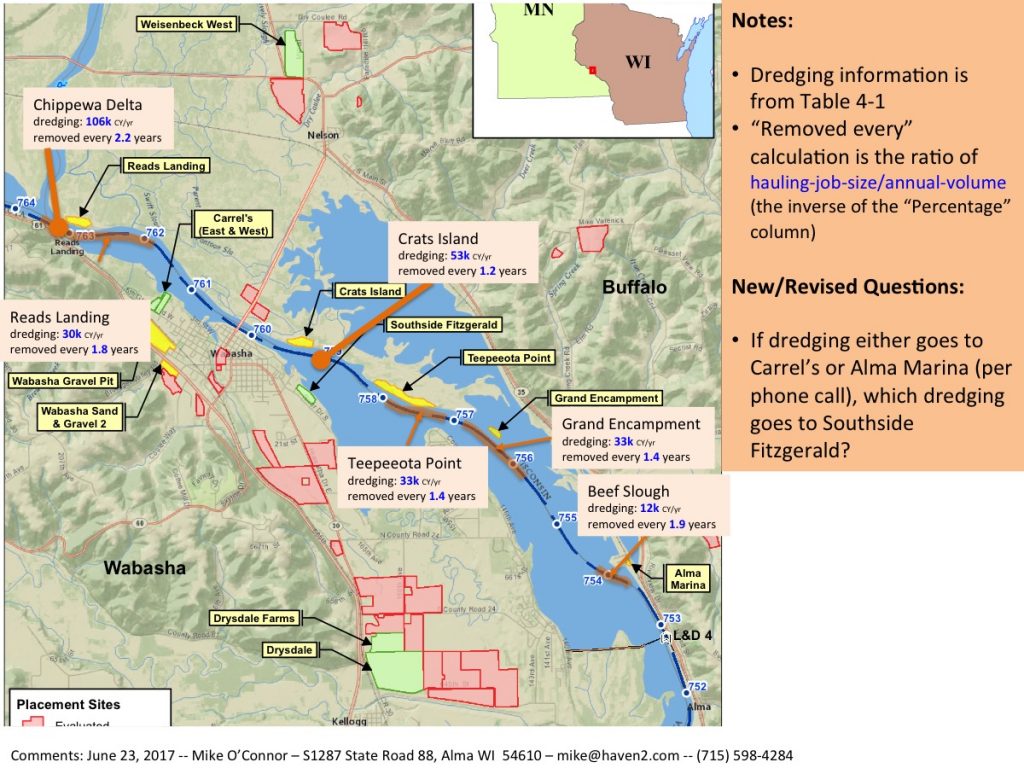 Slide 2 — the big news on this slide is that the Corps is also working on a plan for Pool 5 and there may be more sand moving to shore around Buffalo City.  Buffalo City folks will want to keep an eye out when that plan is published.  I have a few questions here that you may want to ask too. 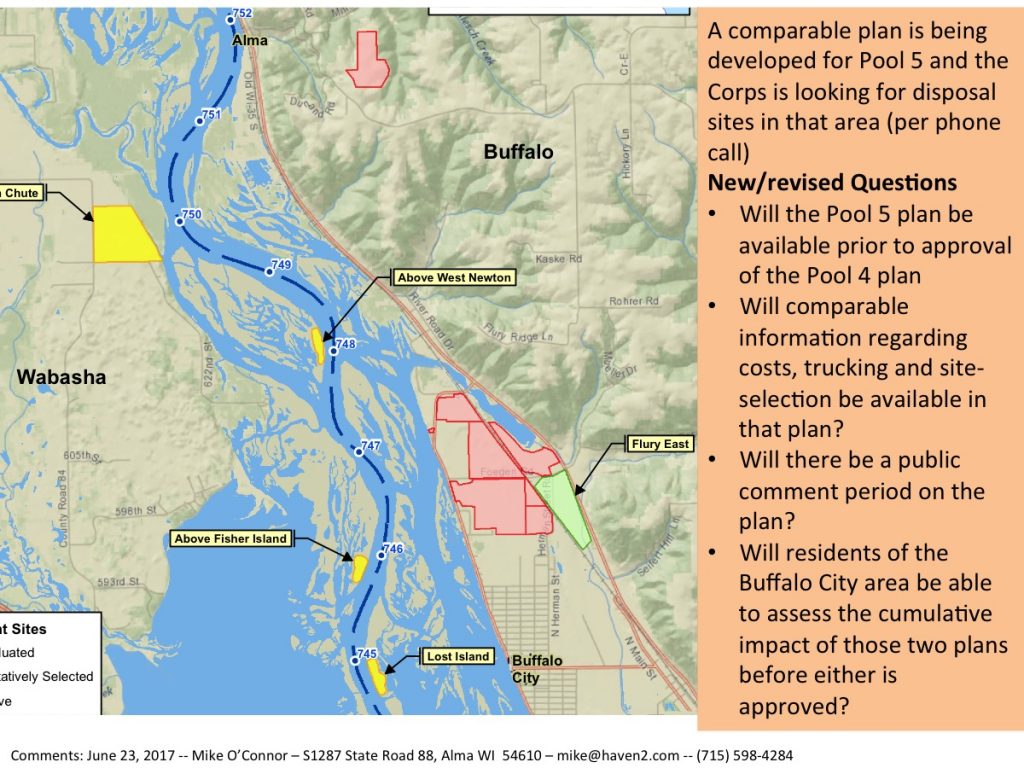 Slide 3 — Nelson folks will want to pay attention to this one.  During the phone conversation the Corps mentioned that the sand headed for Weisenbeck (and thus, through Nelson) will be hauled one year out of four.  More on that in later slides, but again the Southside Fitzgerald route puzzled me. 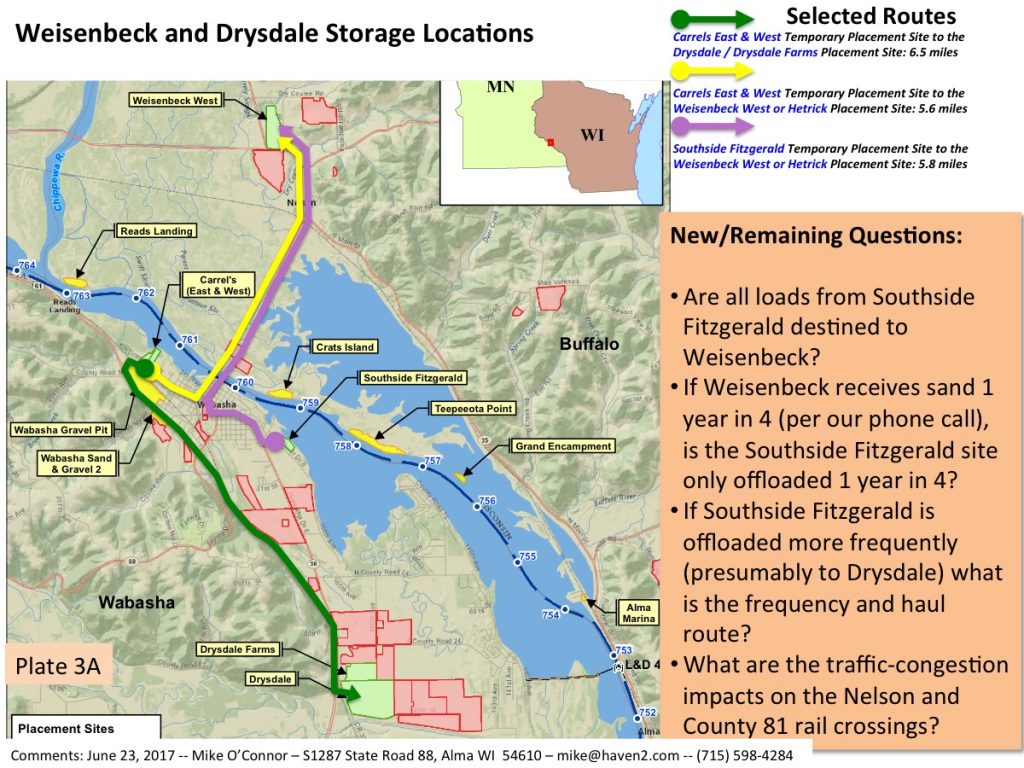 Slide 4 — The Corps mentioned that there will be an operational plan that is where questions of hauling and scheduling will be resolved.  This slide captures some of the highlights of that conversation (especially the possibility that it may be possible to schedule Alma to Flury hauling in a way that avoids the peak tourism months in Alma). 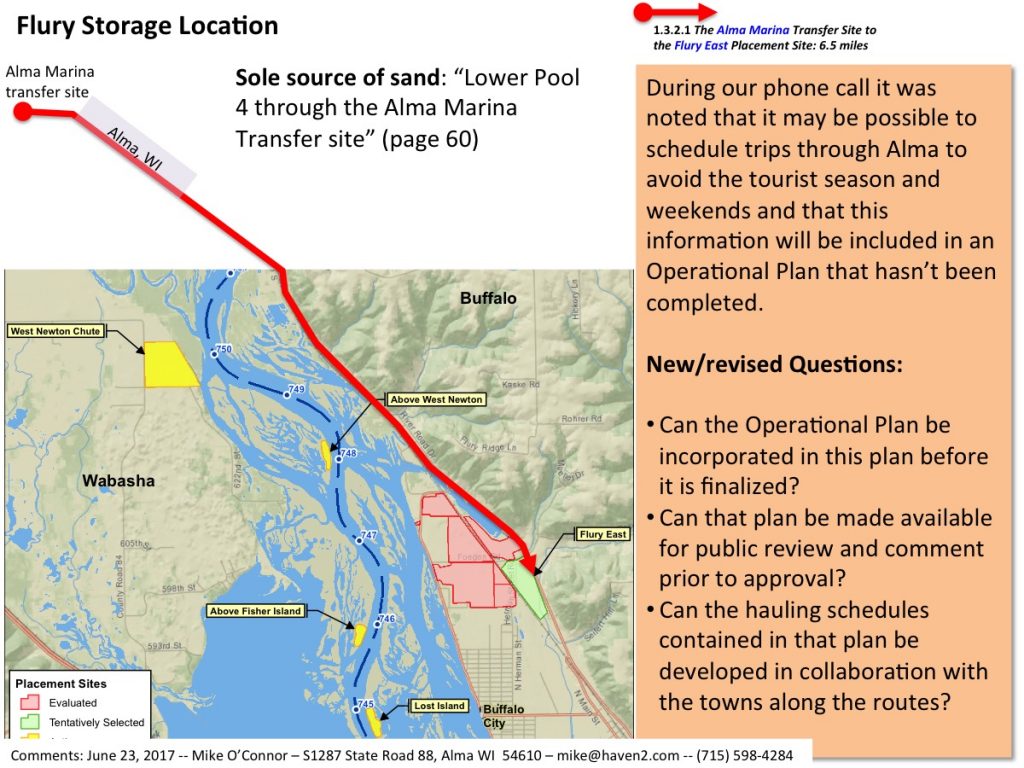 Slide 5 — the Corps folks and I agreed that my original calculations, based on averages of averages weren’t really much use in predicting truck trips through towns.  These next few slides are hopefully a better approximation.  This one is the same as my last attempt — but I left the phone conversation with a couple unanswered questions. 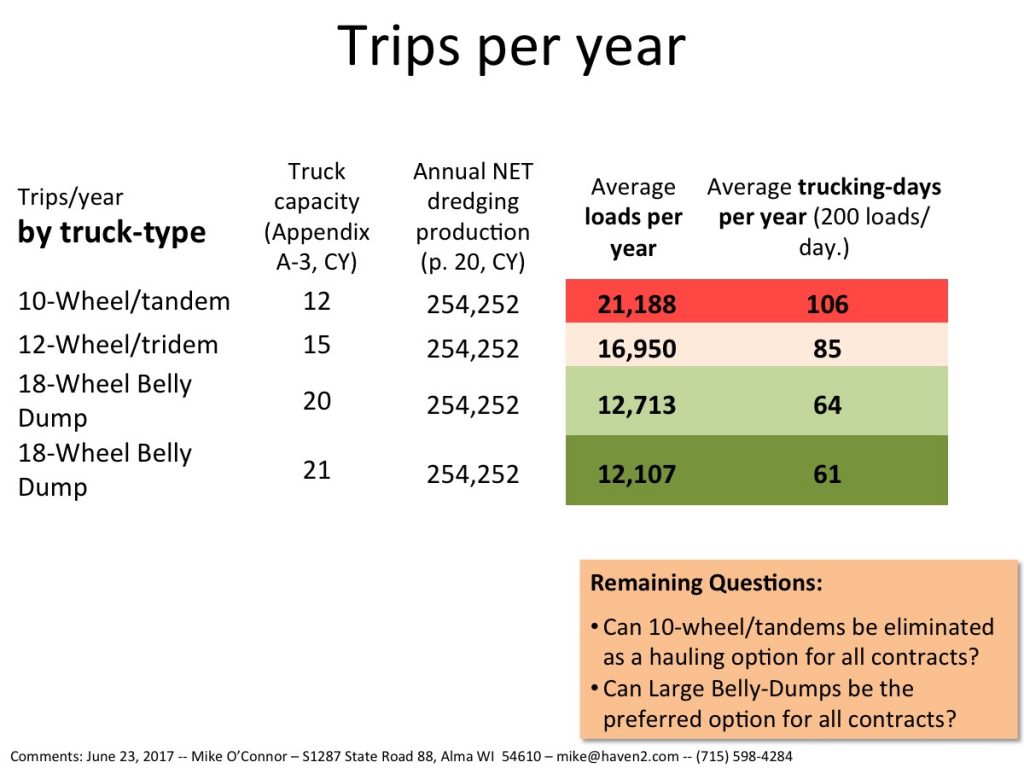 Slide 6 — this is a new analysis, based on dredging production estimates rather than storage location capacity.  I like this approach better.  I have a few questions about how Beef Slough sand is handled. 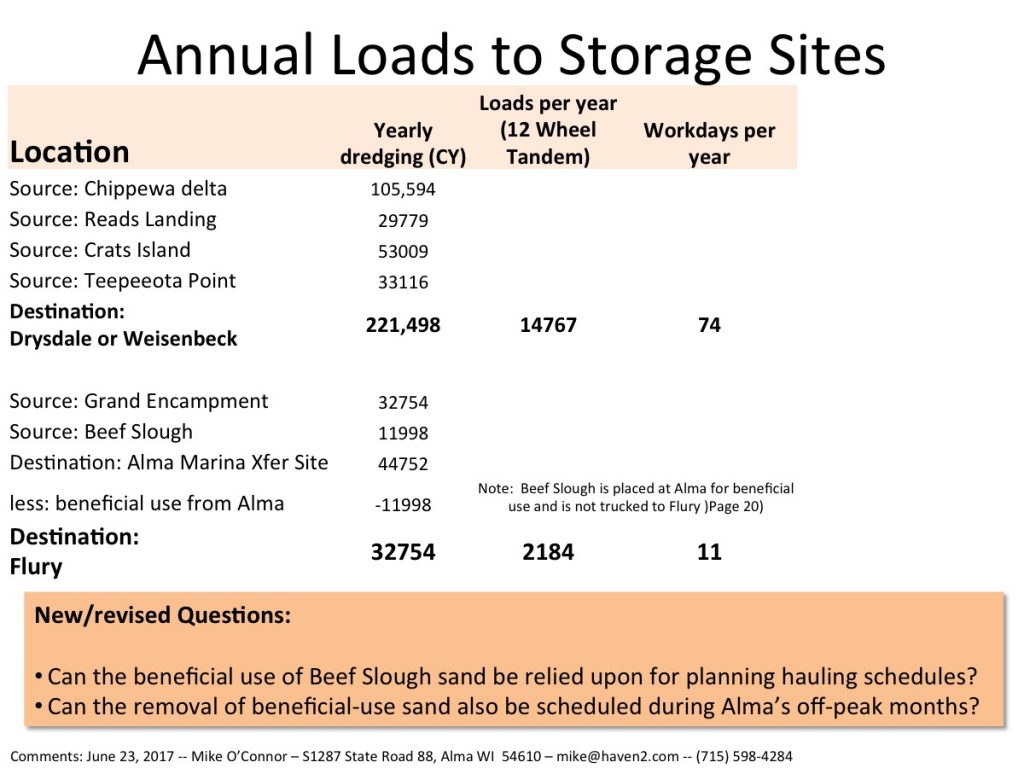 Slide 7 — Here’s the payday slide.  Given my better understanding of what’s going to happen, Nelson is going to have a “burst” of heavy truck traffic one year in four, Alma and Wabasha are going to have roughly the same annual traffic as my last analysis.  Again, a few new questions came to me. 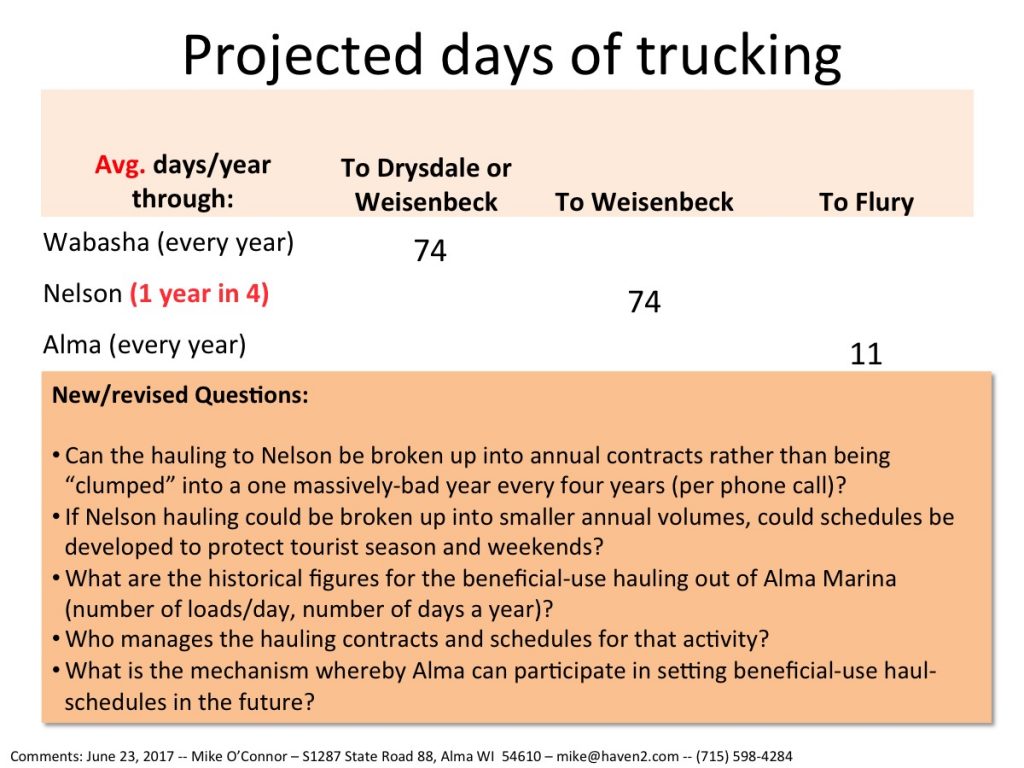 Slide 8 — now it’s time to step back and spend a couple slides on broader issues.  This one is about the 40-year planning time horizon which seems awfully long to me. 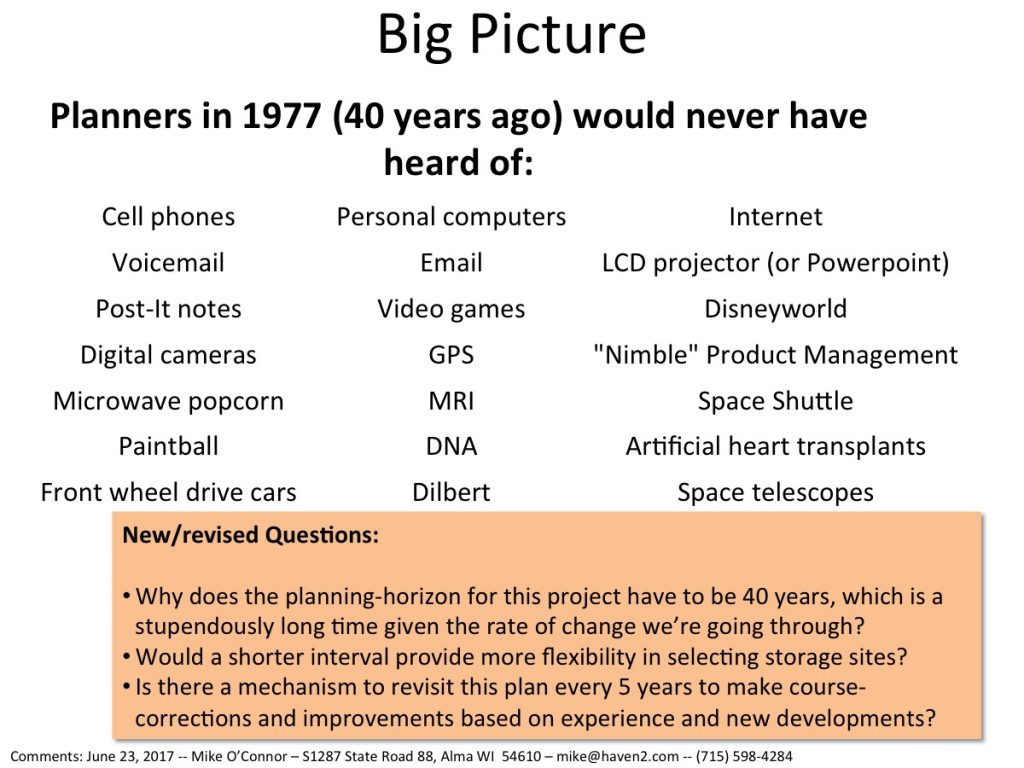 Slide 9 — final slide.  I, like many, wonder whether the Corps is really looking broadly enough at the true value of the sand that they’re processing. 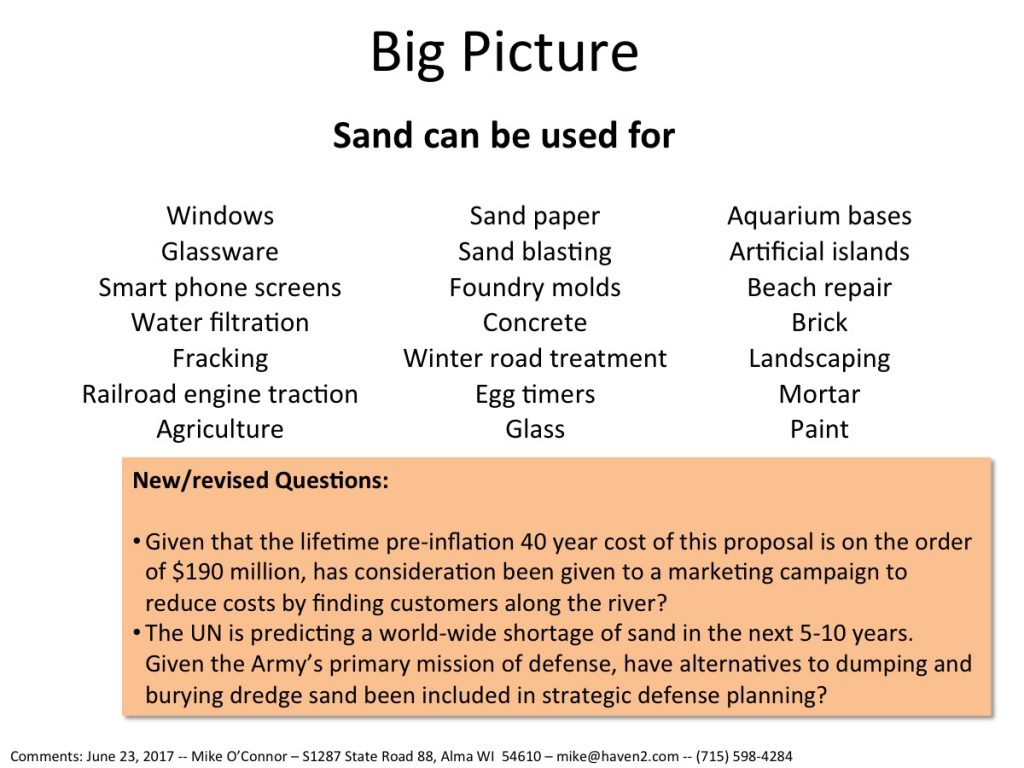